The RIS software allows the user to specify one or more sources of retirement income. Each is described in an account. And each such account has a number of settings.

An account might be a bank account, an account managed by a financial advisor, an annuity in which an insurance company provides monthly payments, etc.. All accounts provide annual payments that sum to equal retirement income. Many also have balances that sum to equal total savings. An account will make payments that may depend on the mortality of the recipients. Thus an account might pay more if both you and your partner are alive than if only one is alive. And in the first year in which you and your partner are both dead, any account with a balance will pay the total amount remaining to your estate.

In this post I will describe the first type of account, which I have called, generically, the X% Rule. This is a generalization of an approach widely recommended by financial advisors, based on a strategy initially termed the “4% Rule”.


The 4% rule, first advocated by William Bengen in “Determining Withdrawal Rates Using Historical Data”, Journal of Financial Planning, vol. 7, no. 4, October 1994, pp. 171-180, is widely used by financial advisors. Bengen initially analyzed annual returns on bonds and stocks in the United States over every possible 30-year sub-period within  a 90-year period . For each sub-period, he calculated the outcomes of a policy of withdrawing a constant real amount equal to 4% of an initial investment value, assuming that funds were invested in a constant mix split evenly between stocks and bonds. He found that in almost all of the 30-year periods, such a policy would not “run out of money” and suggest that in this sense it “should be safe”. In a recent webinar he advocated following the policy with a withdrawal amount equal to 4.5% of the initial value.

Much has been written about the 4% rule. Jason Scott, John Watson and I analyzed it at considerable length in (“The 4% Rule: At What Price?”, Journal of Investment Management, vol. 7, no.3 (Third Quarter) 2009, pp. 1-18"), available here, in which we pointed out a number of its shortcomings. In a recent paper in the September/October issue of the Financial Analysts Journal,  Jason and John document subsequent studies of variants of the 4% rule and advocate a very different approach.

I won't go into details here, but my view is that the 4% rule and the variants that I have allowed in the x% account are sorely lacking. It seems to me that first principles dictate that any rule for spending out of a retirement account should at the very least adhere to the following principle:

The amount you spend should depend on
1. How much money you have, and
2. How long you are likely to need it

The x% rule can meet both criteria in the first year, since the amount spent is x% of the initial value and the value of x can be set taking into account the ages of the recipients (in practice, some advisors do modify the initial payment percentage, making it larger for older clients and smaller for younger ones). But after the first year, the rule fails on both counts. The amount paid is completely divorced from the value of the account. And no account is taken of changes in life expectancy, death of a principal, etc..

In a quest for simplicity, the x% approach to providing retirement income comes up very short on first principles. However, since it persists as a kind of standard in much of the practice of financial advice, I have included it in the software. I'll have more to say about this in subsequent posts. In the meantime, I encourage you to experiment with different settings of the account, the market and the client to better understand the properties of this rule.


Now to the details of the software.


This section will cover details of the implementation of the account in the RIS software. I'll probably belabor some aspects that may be obvious. For many users it will suffice to look at the settings using the software, make any desired changes, and see the implications for savings and income in alternative possible future scenarios. 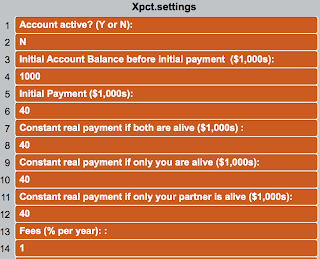 The second setting (line 4) concerns the amount of money initially placed in the account. In general, dollar amounts in RIS are stated in thousands. In this default case the account starts with a million dollars (1000 $ thousand).

The next setting (line 6) indicates the amount to be paid out initially, also stated in thousands of dollars. This will be paid immediately and is thus not subject to any uncertainty. In the default case this is equal to 40 ($ thousand), which is 4% of the initial investment, as in the classic 4% rule.

The original formulation of the 4% rule did not take mortality into account. The assumption was made that an amount with the same purchasing power would be paid in each subsequent year unless there were insufficient funds, in which case the remaining funds would be paid out and subsequently nothing would be available

In RIS I have generalized the approach somewhat to allow different amounts forthree possible conditions: both are alive (line 8), only you are alive (line 10) and only your partner is alive (line 12). In the default settings, all three equal the initial amount, giving the original 4% rule.

The remaining settings concern fees and the investment strategy to be followed when implementing the rule.

Line 14 shows the annual fee as a percentage of the account value. In the default case, 1% of the value of the account will be deducted for fees each year, just before payment is made to the beneficiaries. In practice a smaller fee (for example, 1/12 of 1%) is likely to be deducted each month but since RIS uses only annual returns and valuations, a single deduction is utilized. Financial institutions and advisors often charge lower percentage fees for larger accounts, but 1% is not atypical for accounts of a million dollars. You should adjust this setting to reflect the likely cost of such services in your case. Of course, you could follow an x% rule without an intermediary, saving a considerable amount of money. In such an instance you would set this amount to 0.

The remaining settings describe the investment strategy to be followed. The original versions of the rule assumed that funds would be invested in a relatively constant mix of stocks and bonds – typically with 50 or 60% invested in stocks and the remainder in bonds. More recently, some have advocated the use of a “glide path” in which the proportions of bonds and stocks vary from year to year. To generalize, I have allowed for limited versions of either approach.

To focus on real returns, RIS has only two major types of investments – a market portfolio and a riskless real security (as discussed in a previous post). Any investment strategy can thus described by the proportion of funds (by value) in the market. For example, if the proportion in the market is 0.60 (60%), the remainder (0.40 or 40%) will be invested in the riskless real security. The settings allow the proportion in the market to be as low as 0 and as high as 5. As I discussed in my earlier post, values greater than 1.0 assume that it is possible to “lever up” the market portfolio by borrowing at the riskless real rate of interest (or equivalently, that some sort of investment with the equivalent expected return and risk of such a levered position can be obtained) – an assumption that may be inappropriate in some cases.

The default settings specify the special case in which there is, in effect, no glide path. The market proportion starts at 1.0, the glide path lasts for 0 years and then the proportion continues at 1.0 thereafter.

While the use of these three settings is somewhat forced in the default case, it seemed desirable to allow for a glide path in order to allow the analysis of approaches advocated by some practitioners. I have limited the possibilities by requiring the glide path to be linear, but this should capture at least the key attributes of approaches recommended by some analysts. A similar approach will be used for some of the additional types of account to be added to the software in the future.

Once you have arranged the settings of an X% account to your satisfaction and made it active, you need only return to the RIS home page (via the keyboard left arrow) and click either the "Income Scenarios" or "Savings Scenarios" to see plots of possible future outcomes. It's that easy.