As indicated in previous posts, an analysis using the RIS software can employ one or more accounts, each of which provides retirement income. Earlier I described the X% Rule account. This post covers another type, based on the Required Minimum Distribution requirements specified by the U.S. Internal Revenue Service for those older than 70 ½ holding investments in tax-deferred accounts such as Individual Retirement Accounts and 401(k)s.


The first two columns of the table below are taken directly from publication 590. “Dist Period” is the Distribution Period (Life Expectancy). I have added the final column, which shows the percentage of an account that must be distributed at each age.

The calculations made by the IRS to generate this table are not specified. Presumably, mortality tables were utilized, with some sort of averaging across possible combinations of unmarried investors of both sexes and those married with spouses of both sexes and with differing ages.


There is no presumption that the owner of a tax-deferred account must spend the amount on which taxes must be paid. And many investors have additional sources of retirement income. This said, it has occurred to some investors and analysts that it might be desirable to adopt a retirement income strategy with a policy of spending the percentages of overall savings given in the final column above. Prominent studies of the efficacy of such an approach include:

In their 2012 paper, Sun and Webb concluded that the RMD approach was preferable to the 4% rule. In his 2013 paper, Blanchett found that “the RMD approach works well for periods less than 15 years...” and advocated the use of a more complex approach for subsequent years. I remain agnostic on the issue but feel that the approach is worthy of investigation.


To cover ages not shown in the IRS table, I have made the assumption that the life expectancy for any age younger than 70 will be (70 – age) years longer than that for age 70. Thus for a 65-year old the assumed life expectancy is 27.4 + 5, or 32.5 years. Moreover, when there are two participants (you and your partner), I base the withdrawal percentage each year on the age of the older participant in that year.


The settings for an RMD account are shown below. 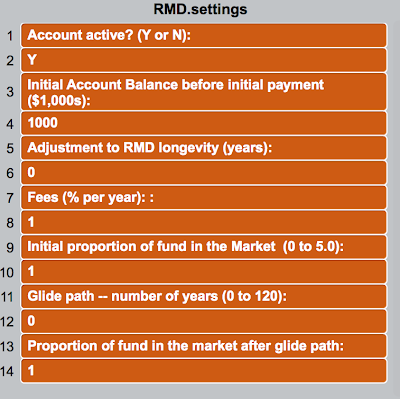 The initial setting (line 2) is the usual one that determines whether or not the account is active. The second (line 4) indicates the initial balance – here, a million dollars (1,000 $ thousand). The next setting allows for a variation of the strategy in which the RMD longevity numbers are altered by adding or subtracting a constant number of years. For example, if the adjustment is 2, the life expectancy at age 70 will be 29.4 (27.4 + 2) years, and every other life expectancy will be adjusted by adding 2 years to the amount shown in the table. Lengthening the life expectancies in this manner will reduce the percentages of savings paid, lowering retirement income payments and increasing possible estate values. If desired, you may enter a negative number for this setting. This will reduce the life expectancies and increase the percentage payments. (Not to worry -- if this would result in any expectancies less than one, they are replaced with 1.0).

The RMD approach is a special case of a more general class that I have called Proportional Payout (PPO) strategies, in which a pre-specified proportion of an investment account is paid out to provide retirement income in each year. In previous research, I have used a set of proportions specified for the Fidelity Income Replacement 2042 Fund, which is designed to pay out all the assets in the portfolio by the end of 2042. For a detailed analysis, see my paper in the European Financial Management Journal, a version of which is here. While the Fidelity Funds are designed specifically for producing retirement income, they will pay out all assets by a target date no more than 30 years in the future. In contrast, the RMD approach as implemented in the RIS software will provide some income until the both participants are gone, leaving at least some funds for an estate. For this reason, and because it uses non-proprietary data, I chose to include the RMD method in the software. However, it would be a simple matter for a user to alter the longevity table used for the calculations to produce different results.

Do try the RMD account. Unlike the X% Rule, it conforms with two sensible criteria in each year:

The amount you spend should depend on
1. How much money you have, and
2. How long you are likely to need it

This doesn't mean it is the best approach for you. But, combined with a sensible investment policy, it might provide a desirable component for your overall retirement income strategy.