There are many uncertainties associated with one's retirement years. This project is about retirement income – how much income will be available in each year and for how many years will income be needed. There will be much to say about the generation of income but a key aspect of any strategy for producing retirement income is the question of how long it will be needed.

To put it crassly – how long will the primary recipients of income live?


Very few want to address this question. But it is a key component of the process required to make sensible financial decisions in retirement. The programs that I will develop will rely heavily on longevity probability estimates. Hence it seems suitable to start the Retirement Income Scenarios (RIS) software with such estimates.


Consider Bob and Sue Smith, whom we will call “The Client”. Bob is a 66 year old male and Sue a 63year old female. How long will they live? The answer is almost certainly that no one really knows. To approach this question in any rational manner one must deal with probabilities. Let's say that the probability that Bob will die next year is 1.3%. This means that out of cohort of 1,000 men of Bob's age, 13 are likely to die in the next twelve months. To put it more positively, 987 of them are likely to survive to reach 67.


For the RIS software I used tables provided by the United States Society of Actuaries based on statistics about the longevity of participants in a number of retirement plans in the U.S. The basic RP-2000 tables give estimated mortality probabilities for the year 2000 for (1) males and (2) females of various ages. The original data concerned mortality rates for employees up to age 70 and “healthy annuitants” (those receiving retirement benefits) from ages 50 through 120. Then these were combined to provide “combined healthy” mortality rates for all ages through 120 – the numbers that I used. For details, see the RP-2000 mortality tables.


Of course, no one really knows the percentage of males or females of a given age that will die in each future year. There is thus uncertainty about the probabilities computed in this manner. I like to call this “table risk”. We don't really know what the future statistics will be. What if there is a cure for a major type of cancer? What if there is a nuclear holocaust? What if an antibiotic-resistant virus spreads around the world? The retirement income scenarios in my software will ignore this additional source of uncertainty. But insurance companies that sell annuities quite rightly worry about it a great deal, charging higher prices than would be dictated by standard annuity tables in order to provide a cushion if mortality rates increase (for life insurance) or decrease (for annuities). To some extent, this danger can be mitigated by issuing both types of policies, but life insurance is (appropriately) purchased mostly by younger people and annuities (appropriately) by older folks, so any offsets will be, at best, imperfect. I'll have more to say about the pricing of annuities and possible societal approaches for dealing with such table risk in later blogs.


In practice there are many different mortality tables. Insurance companies use tables with higher mortalities when computing prices for life insurance policies, to reflect the likelihood that the pool of applicants will be less healthy than the average person (adverse selection) and that people with such policies might take more risk (moral hazard). Conversely, insurance companies use tables with lower mortalities for annuity policies, on the assumption that the pool of purchasers will be more healthy than the average person and likely to take better care of themselves.


The U.S. Internal Revenue services requires corporate pension plans under its jurisdiction to use the RP-2000 tables with mortality improvement. A number of academic studies have utilized the tables as well. Hence my choice.


Now, to the Longevity Graph feature of the RIS software.


To access the current version of the software, go to scratch.mit.edu and type wfsharpe in the search box. Then click on the latest RIS version shown. Click the green flag. You will see two buttons. Click the “Client Settings” button to see the current settings and to put in your own information. To leave a setting as is, simply press the Return key. When you are finished you will return to the main menu.


At any time (except when you are entering inputs), you may press the keyboard up arrow to turn context-sensitive help on or off. You may also return to the main menu by pressing the keyboard left arrow.


To make the software run faster at any time hold down the Shift key and click the green flag at the top of the window to place Scratch in turbo mode. To show the information in full-screen mode, click the icon at the top left of the window. To return to the smaller version, click it again.


If you sign up for a free Scratch account, you may look at and, if desired, modify the software and save the revised version as a project in your own account at the Scratch site or on your own computer. If you have modified the client settings, the latest information will be saved with the software and will be available when you re-load it.


So much for logistics – back to substance.


If you feel that you or your partner are more or less healthy than the average healthy person of your age, you may want to put in a different age than your actual physical age. There are web sites that will give you an estimate for this purpose. I have looked at several and found them wanting. Some are blatant attempts to get your health information in order to sell you something (a magic elixir, anyone?). Others seem quite crude. I tried one that provides your “death date”. It took my health information, then told me that my death date had passed and parted by telling me to have a nice day (I'm not making this up). My friends confirmed that I am not yet dead (Monty Python fans will recognize the phrase). Perhaps the best approach is to ask your family doctor for his or her estimate of your effective age, health-wise.


Once you have changed the client settings, click the “Longevity Graph” button and you will see your personal Longevity Graph. Here is the one for the Smiths: 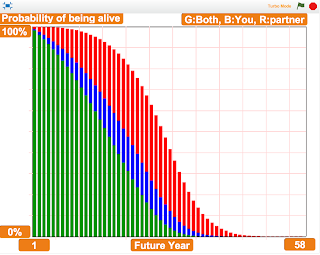 
If you do not have a partner, change the client settings to make your fictional partner 120 years old. This rather crude approach will insure that he or she is not around in any future year.


Of course in any specific projected future scenario you will live some specific number of years, as will your partner, This will be evident with alternative possible scenarios are shown in future versions of the RIS system. But the probabilities shown in the longevity graph provide some context as you think about alternative retirement income strategies.


You may find all this terribly depressing. It is not pleasant to even think about dying and to consider the chances that you and/or your partner might not be around in some near or distant future year. On the other hand it may be depressing to think about the possibility that you will need income for decades in the future. I share your pain. But longevity is truly a fact of life, and it is one of three major uncertainties that must be faced when making plans for retirement income (the other two are investment returns and health issues). Forewarned is forearmed.

Posted by William Sharpe at 3:03 PM