This is about the scenarios that can be generated and shown in the RIS software. I assume that you have dealt with the client settings and the market settings and have also set up one or more accounts and made at least one of them active. At this point you are almost ready to generate and plot scenarios, But you will probably first need to alter the initial scenario settings. The figure below shows the six settings and their default values in the RIS-20140101 version. 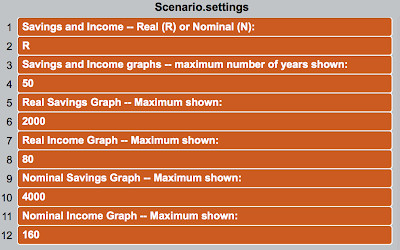 The first setting (line 2) indicates whether you want to project real (inflation-adjusted) or nominal values. I strongly suggest that you focus on real values for both savings and income, since these are far more relevant in estimating possible consumption of goods and services. However, it may be instructive in some cases to look at the nominal values, since some retirement income strategies focus on them. That said, it is important not to be fooled by such displays. For example, it is not enough for a strategy to provide constant or slightly increasing nominal income if the increases are not sufficient to cover inflation. Here is a simple bromide to keep in mind:


By all means, feel free to look at the nominal values of savings and income for scenarios, but then examine the real values in order to seriously evaluatie a strategy.


The second setting (line 4) indicates the number of future years that you wish to display on the savings and income graphs. Any values for subsequent years will be shown just outside the right-hand border of the graph. This conforms with a general rule: If a value falls outside the range of a graph, it is shown outside the border, using the closest x and/or y value

The remaining settings indicate the maximum values shown inside the borders for the four possible graphs (real savings, real income, nominal savings and nominal income). You may have to experiment a bit to find the most satisfactory values for these settings. A useful rule of thumb for strategies that rely on an initial investment is to set the maximum real savings at twice the initial investment and the maximum real income at twice the initial income. For nominal values it is useful to set maximum values at four times the initial amounts, since with typical settings for expected inflation, nominal values in the later years can be twice as large as real values.

I suggest that you use make rough estimates for all these settings, then generate some scenarios to see what happens. If too many values fall outside the borders, increase the corresponding setting. If there is too much empty space within the graph, decrease the corresponding setting. It should not take much time to find settings that provide a reasonable balance, excluding few values and using the space within the graph efficiently.

Once you have adjusted these scenario settings, you are ready to see the results of your handiwork by clicking either the savings scenario or income scenario button. I'll cover these in the next post.
Posted by William Sharpe at 10:51 AM