A retirement income strategy is designed to provide incomes at different times to different recipients. However, the outcomes will depend on future events -- in our scenarios, longevity, investment returns and inflation. But it is helpful to consider the present value of prospective incomes and how it is distributed among the key recipients.

In this post I'll describe the basic approach used for the Present Value Analysis included in the RIS software; more details will follow in the next post.

To start, consider the problem of valuation of an investment in a share of Apple common stock. This is a claim that provides the owner with any future dividends that Apple might pay as well as the ability to sell the share at any future date. Since shares are traded publicly it is relatively straightforward to determine the market price, which represents a consensus opinion of the present value of Apple's future prospects. If you think the share is worth more, you may well want to buy more shares; if less, you may want to sell any shares you hold. But the market price reflects the overall evaluation of other investors. Economists define this as its present value and consider it a highly relevant measure.

The RIS software takes the same approach when calculating the present values of prospective incomes. In particular, it generates a number of scenarios, each covering many years.

Now, imagine a large matrix (table) with 5,000 rows (one for each scenario) and 40 columns (one for each future year). In each cell of the matrix there is an income payment and an indication of the recipient (you and your partner, you alone, your partner alone, or your estate).

Next, imagine that for every cell in this matrix there is a number representing the present value of $1. For example, in row (scenario) 123, column (year) 10 there is a number representing the amount that investors would pay today to receive $1 in year 10 if and only if scenario 123 (and no other) happened. What would determine this value? First, the probability that the scenario would take place. And second, the state of the world in that scenario.

The probability is easily determined. In our simulation there are 5,000 scenarios so the probability that any one will occur is 1/5000.  But there is good reason to believe that the prices will differ across scenarios.

To approach this in a more general context, economists use a concept that I like to term the price per chance (PPC) for payment at a given future time in a given future state of the world. And there is good reason to assume that this value will depend on (1) the number of years before the state occurs and (2) the economic health of the economy in that state. In particular, it makes sense to assume that other things equal, the present (market) value of a future unit of purchasing power is greater for states of scarcity than for states of plenty. In our simulations the best available measure of the state of the economy is the future level of the real value of the market portfolio of world bonds and stocks. So we assume that the present value of $1 in a future state divided by the probability of that outcome depends on the number of years before the state occurs and on the cumulative real value of $1 invested in the market portfolio today and held until that future year. In sum, other things equal, the present value of $1 to be received in a given state divided by the probability is lower, the farther in the future the state and the smaller the cumulative return on the market over the period.

The pricing kernel formula reflects these assumptions. It indicates the price (present value) per chance (probability) of $1 for a given state in the future. To return to our matrix with 5,000 rows (scenarios) and 40 columns (years), imagine that there is present value of $1 in each cell, computed by multiplying the corresponding price per chance by the probability (in this case, 1/5,000). Then we can value each cell's payment by multiplying the amount paid by the present value. Moreover we can sum up the present values of all the payments made to various recipients. In effect, this is what the RIS software does (although it actually updates sums as it creates scenarios in order to avoid the need to store large matrices). In addition, the software provides similar computations for any fees paid to financial advisors or others (as if they were stored in a second matrix).

Here is a result (based on a standard RMD account with 1% fees), obtained by clicking the Present Values button under Analyses. 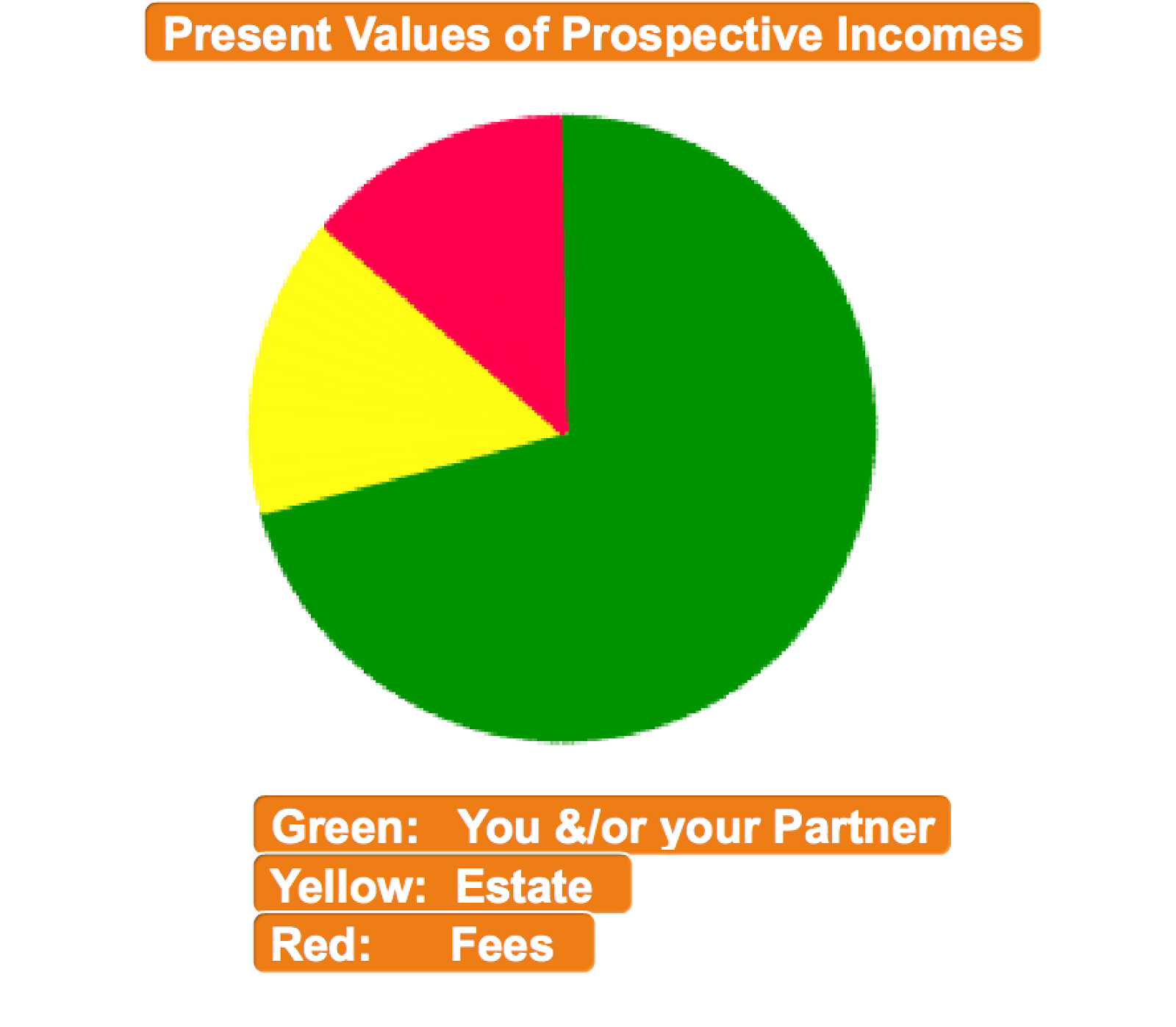 I willl have more to say about these pie charts in future posts analyzing alternative strategies. But here are two generic observations.

First, only annuities offer reasonable income prospects for a household without providing valuable prospects for an estate. Moreover, different variations on a theme can substantially change the division of present value between the household and its estate, as can be seen by changing settings, then generating another set of scenarios.

Second, fees that may seem small may offer very valuable prospects for the person or organization charging the fees, with an associated decrease in the value of the prospects for the household and/or its estate. Note that in the figure above, a 1% fee is worth almost 1/8th of the total present value -- a cautionary tale.

Present value calculations using a limited number of scenarios are subject to some error. I'll explore this more in subsequent posts, but suffice it to say that it is important to have at least 5,000 scenarios before making such a calculation. You will see that if the scenario settings called for fewer than 5,000 scenarios when you produced multiple scenarios, the Present Values analysis will politely refuse to give you any results. The solution is, of course, to change the scenario settings, then produce a new set of multiple scenarios.

You will notice also that there are no numbers given for the percentages of the various recipients' prospects. This was not an oversight. I chose to show only the pie chart in deference to the imprecision of the estimates. You can test the dependence of the results on the scenarios generated by pressing the multiple scenarios button again, generating a new set of scenarios, then seeing the resulting present value pie chart. With luck, the variation may be relatively slight. And the larger the number of scenarios, the smaller it should be.

Here's the bottom line. Any Monte Carlo analyses is at best an approximation of reality. It is a complex world out there. At best we can only hope that our models and simulations shed useful light on the relative prospects of different strategies.