The previous post ("Analyzing Multiple Scenarios") showed how to generate multiple scenarios using the RIS software, then view the yearly income ranges using the Analysis routine titled (appropriately enough) "Yearly Incomes". The resulting graph shows the probabilities of exceeding alternative levels of income in each of the future years in the selected range.

In economic analyses of multiple years' incomes, it is often assumed that people have "time separable utility functions." In principle, a person with such preferences can evaluate the probabilities of alternative incomes in any given year, then calculate the "expected utility" of that range of possibilities. If in this manner the results for each of the future years are expressed in terms of present-day happiness, the expected utilities for each of the years can be added together to get a single measure of the overall desirability of the prospective future incomes. An individual preferences of this type can in theory determine the desirability of a strategy by studying only a graph showing yearly incomes with the accompanying information about the probability of being alive in each year.  To be sure, even in this simplified setting, a couple would have to consider the probabilities of being alive and most people would want to include information about the possible amounts that could be left for an estate. But information on the changes in income from each year to the next would not be needed.

However, many people are in fact concerned with the extent to which their income might change from year to year. To accommodate them the RIS software also includes graphs showing at least some relevant information. On the Analysis page click the button labelled "Yr/Yr Incomes"; you will get a graph something like this: 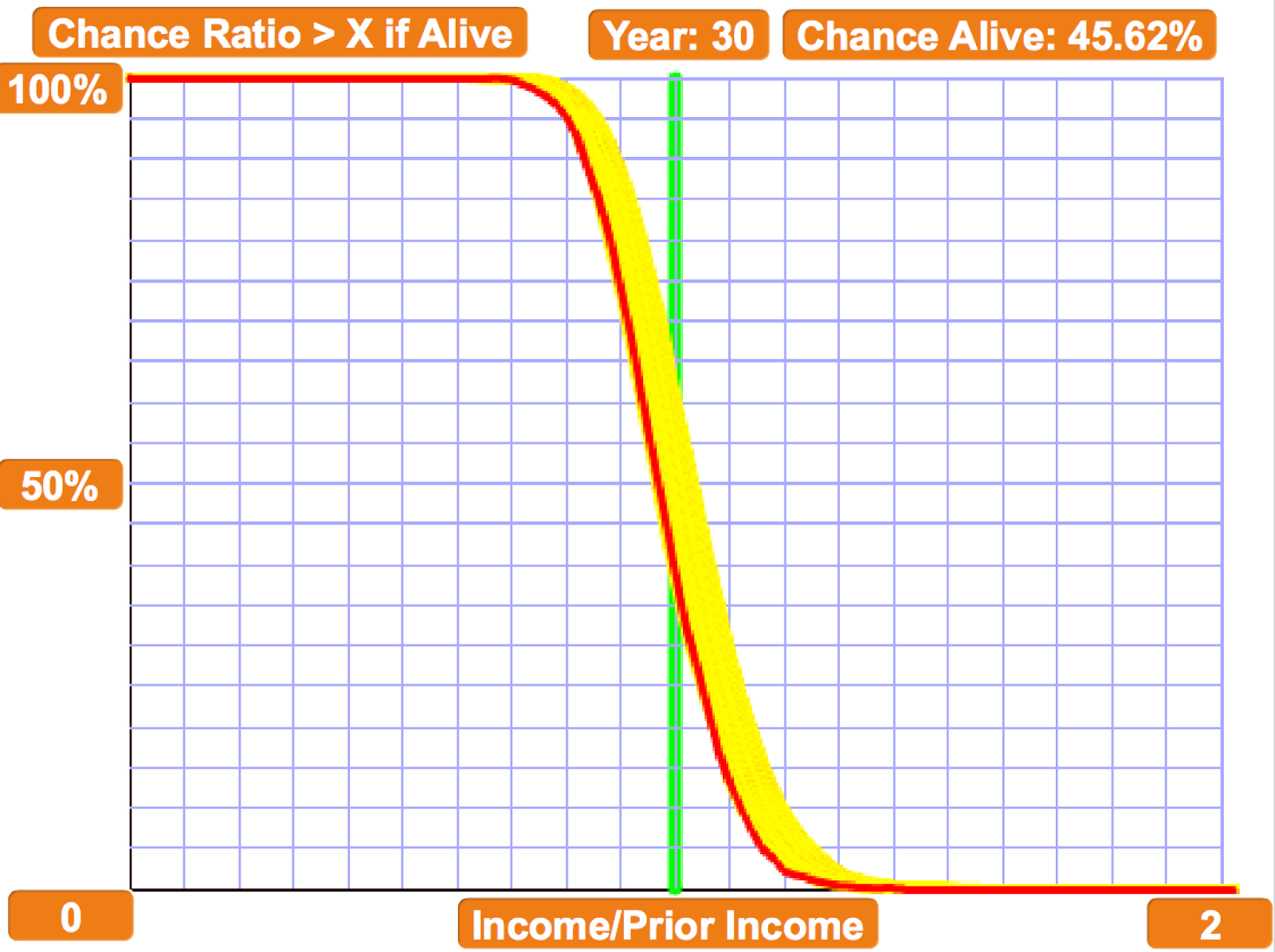 In this case, each curve shows (on the vertical axis) the probability of exceeding a given value of a ratio of income divided by the prior year's income (X), shown on the horizontal axis. The ratios shown run from 0 to 2.0, with a ratio of 1.0 indicated by a green vertical line. As with the Yearly Income graph, the chance that one or both of you and your partner will be alive in a given year is shown in the upper right. Also, as with that graph, there are two variants. In the first, as in the case shown above, each graph starts at 100% and shows the ratios for cases in which at least one of the members of the household is alive. The other, shown below, plots the probabilities that the ratios will (1) exceed various levels and (2) that one or both of the members of the household will be alive. 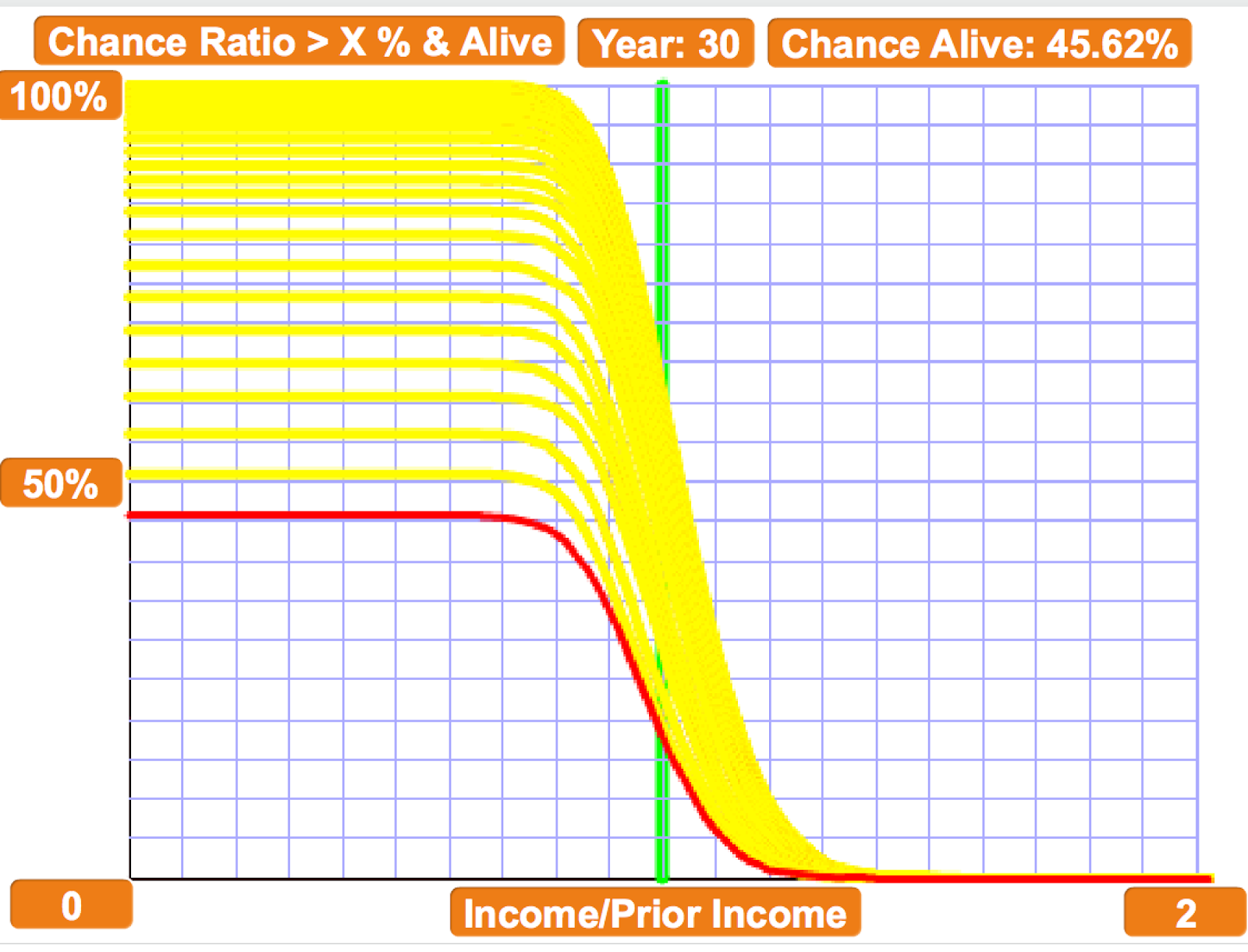 It is important to understand how these graphs are constructed. With some exceptions, as each one of the multiple scenarios is generated, the ratio of each year's income to that of the prior year is calculated, with the result added to tables to be used to produce the graphs. Excluded are cases in which the recipient in a year differs from that in the prior year. Thus the final year in which any remaining savings goes to the estate is excluded as well as any year in which the household changes from two people to one (since some strategies call for changes in income in such instances that are not related to investment performance).

As with the yearly income graph, the year/year income graph should be interpreted as showing information available at the present time about the range of outcomes that could take place future years. For example, the range of possible year/year income ratios for years 19 and 20 is based on information available today. When year 19 actually arrives, the range of possible ratios of year 20 income to year 19 income will undoubtedly be very different, since many possible scenarios concerning the first 19 years will have failed to take place.

This distinction helps illustrate the difficulty of assessing the range of possible outcomes for any multi-year income strategy. There are simply too many income combinations to consider in detail. To emphasize the point, look at the graph below, showing the likelihoods of different combinations of income one and two years hence for a market-based strategy. 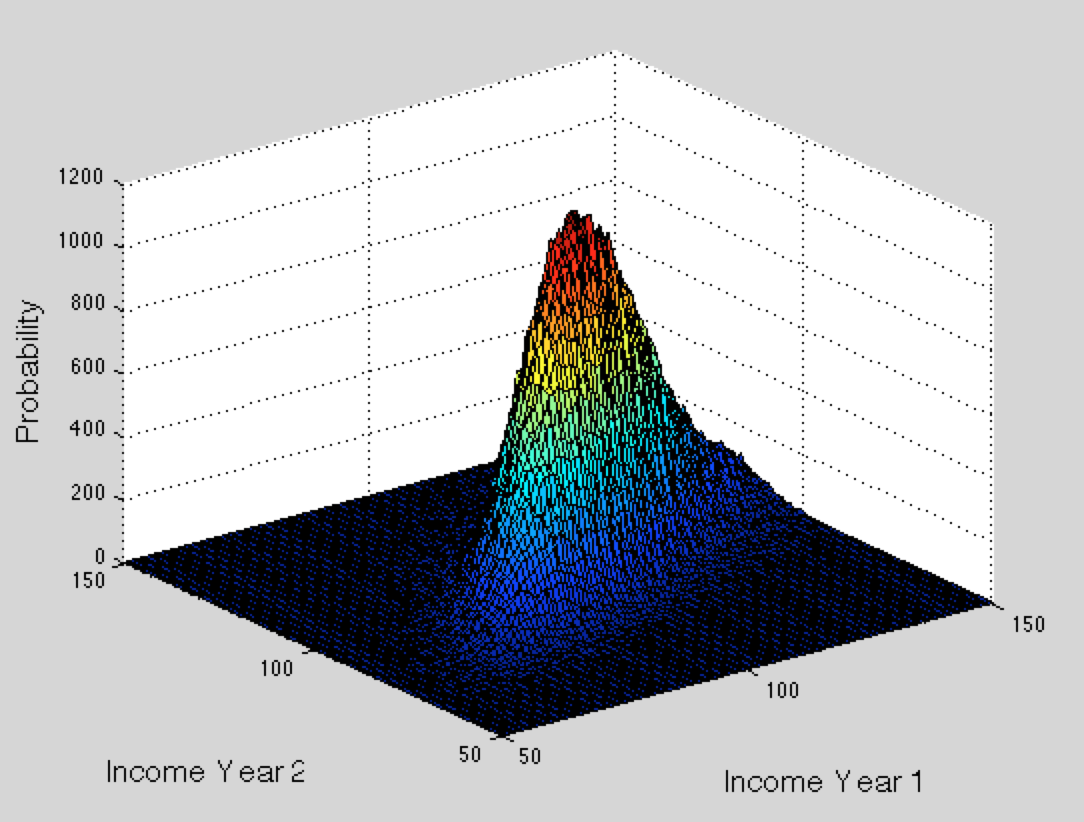 It is possible that someone with training and patience could study such a graph, compare it with another showing the likelihoods of incomes from some other strategy, then choose the preferred strategy. But most retirement income strategies have many more dimensions (years of income) than two. It is simply impossible to portray and assess alternative 40-dimensional probability distributions of income.  One needs rather to concentrate on a manageable number of attributes. For some investors our yearly income graphs will suffice. Others may wish to also consider the year/year income graphs. More than that is beyond this project.